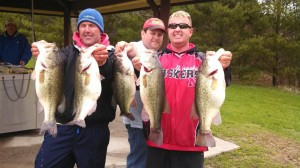 This inaugural event held on Lake Icaria brought some challenging weather but surely didn’t impact the fishing.  With water temperatures in the low 40’s and air temperature at 34 at takeoff, a challenging event was surely anticipated.

Teams consistently brought in decent bags with most having 2-3 fish.  The Team of Shawn Holly and Rob Weberg stole the show with a whopping 5 fish limit of 27.60 lbs.

“It was truly one of those special days” said Holly.  “We had a limit of around 15 pounds by 9:30 and started to figure some things out.  Once we changed up, we continued to cull throughout the day.  We lost another fish that could of put us over 30 pounds.” 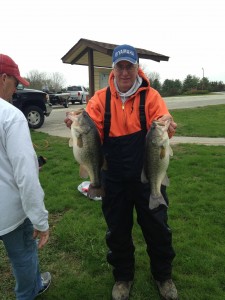 Big fish for the event went to the team of Cliff Richter and Lance Beasley with a 6.68 lb.  This pig was caught mid-morning on a jig.  “I felt a double tap and immediately told Lance to get the net even before I sent the hook” said Richter.  “I just knew it was a big fish.” 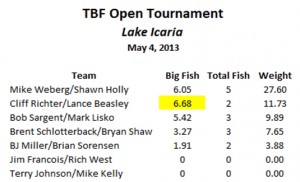